Trying to polish off version 0.6x of lrzip to be nice and stable and working as planned, I've made a few more updates addressing a few issues that have come up, along with some outside help. Here's the short changelog:

lrzip now detects when output is being redirected without a filename and will automatically output to stdout. Apple builds, which had errors on compressing files larger than 2GB in size, were fixed. lrztar now properly supports -o, -O, and -S. The lrzip configuration file now supports encryption. lrzip will now warn if it's inappropriately passed a directory as an argument directly.

Probably the most fun part of this is the first feature upgrade to do with stdout, which I use regularly now since I store all my kernels and patches as .lrz, I can now do:

Also, graysky made some nice graphs and I feel obliged to put them up here: 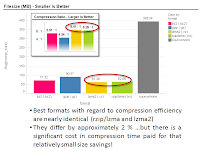 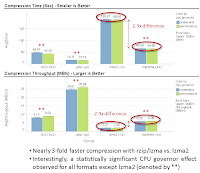 Of course, with much larger files and more CPUs and RAM the discrepancy becomes much greater with lrzip but that doesn't change the fact this is a real world test.

So grab it here:
LRZIP ON FRESHMEAT

Email ThisBlogThis!Share to TwitterShare to FacebookShare to Pinterest
Labels: lrzip