I was meant to be on holidays this week, and indeed I've been away from home somewhere warm. While BFS was supposed to be the last thing I cared about, I was fortunate enough to have other people actually find some bugfixes to BFS. First up was _sid_ who found some very small optimisations that I've committed to the new version of BFS. But even more impressively, Serge Belyshev found a long standing bug that would cause bad latencies when Hz values were low, due to the "last_ran" variable not being set. This may well have been causing a significant latency disadvantage to BFS when Hz was 100. 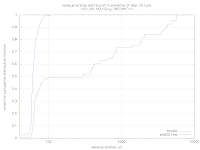 As you can see in this graph, worst case latencies could be 100 times better with this bug fixed. While it will affect all Hz values, it is most significant at low Hz and probably unnoticeable by the time you're on 1000Hz. Those who are on low Hz configurations, especially those on say android, will notice a dramatic speedup moving to BFS 401.

Again, thanks VERY much to the testers and even more to those contributing bugfixes and code.
Posted by ck at 21:20