Phoronix once benchmarked BFS in its early days. I guess at the prodding of people who suggested it here (thanks!), they've revisited it. Of course they did a throughput benchmark comparison which is kinda missing the point of BFS, but then again if they find ANY throughput benchmark where BFS is better, that's somewhere between amusing and disappointing. Anyway they did mention in passing that "However, the system with the BFS scheduler was more responsive during the test process." While this at least pays homage to what BFS really is about, it makes me wonder - what were they doing while the benchmarks ran? Benchmarks are meant to run without anything else running on the machine.

Anyway, thanks to phoronix for conducting these benchmarks and their logo suggestion.


Probably more interesting a test of something besides pure throughput is that of a server admin who was running mainline with 6000-8000 processes and his system was falling over under that load. Then he switched to BFS with no change in the usage (actually increasing) which fixed his problems. Here's the graph and see if you can guess when he switched to BFS. 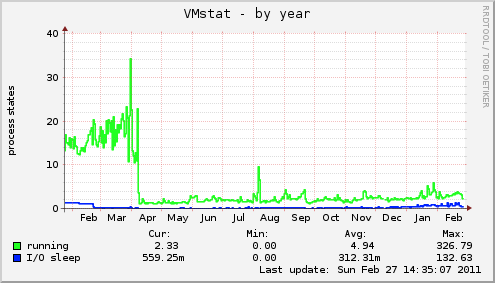 Email ThisBlogThis!Share to TwitterShare to FacebookShare to Pinterest
Labels: bfs